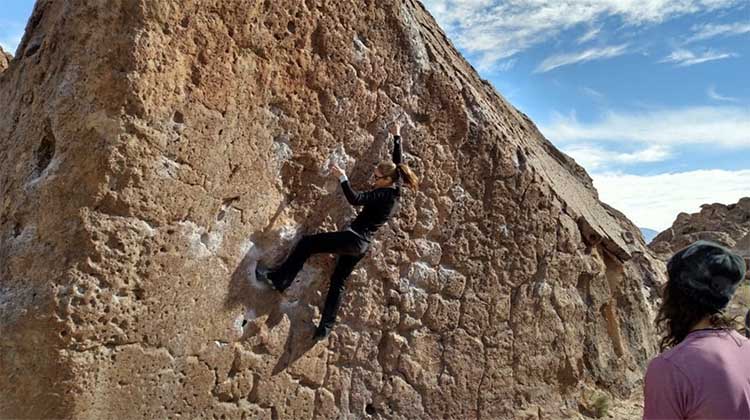 As its name implies, Bouldering is basically the type of Climbing where one has to work his or her way through a boulder route which is usually called problem. As simple as it may sound, some problems require specific moves for one to get through them. These moves require intense training and practice to successfully pull them off. Keep in mind though that Bouldering doesn't actually need most pieces of rock climbing equipment such as Ropes, Carabiners, and Harnesses. It only requires climbing shoes for better scaling, chalk for better grip, obviously a Chalk Bag for the Chalk to be used, and Crash Pads to cushion a fall. Sometimes, instead of using Crash Pads, climbers assign a spotter, or someone who will stand below the climber to prevent the latter from landing badly.

Bouldering has already been practiced as early as 1880, used by the British in training climbers for longer mountain climbs. It was only during the 1950s when the Father of Modern Bouldering, John Gill, who is also a climber and gymnast, brought Bouldering into the mainstream and made it into a sport in its own right.

As a sport, Bouldering is steadily working its way up to the ranks of extreme sport. It already spawned some star athletes such as Lisa Rands, Ryan Pasquill, Emily Harrington. It is also increasingly getting popular as a sport that promotes physical fitness, body endurance, creativity, and quick thinking.

In short, Bouldering is a sport suitable for people who thrive in adventure and for adrenaline seekers who aren't afraid to take risks. Sure, it may be difficult at the beginning, but after a few tries on the rock and finally getting the hang of it, rest assured that the feeling of accomplishment and relief will overshadow whatever frustrations you've had when you were starting.

In France, the first documented attempts at Bouldering may have started in the 1870's. In 1874, Ernest Cezanne created the Club Alpin Francais in Paris. During Hiking trips to Fontainebleau, its members discovered the magic of these sandstone boulders. As they fell under the allure of the forest, they realized that Bouldering would be an excellent way to prepare for future alpine expeditions.

In 1935, a man named Pierre Allain invented the soft soled Climbing Shoe for serious Rock Climbing, which looked a lot like the footwear nowadays but it lacked sticky rubber, which wasn't developed until the 1970's in Spain. Allain wore his shoes that same year, for the first time in the mountains on an ascent of the north face of DRU. Another climber named Pierre Chevalier introduced nylon Climbing Rope about 1943. Fountainebleau Bouldering never caught the attention of most climbers until the beginning of the 1970's. In the early 1980's, the turning point of Bouldering as we know it began to take place and quickly adopted an athlete's logic of climbing. In 1947, Fred Bernik designed the first formal Bouldering circuits at Fountainebleau. These protocols became an end, giving rise to speed and difficulty competitions. Today, a famous boulder problem that most of us know about is in camp 4 Yosemite called Midnight lightning. It was first done by Ron Kauk in 1978. Kauk and Bachar worked on the problem for two months, getting to the lip. Finally, Kauk got to the lip and rocked over to finish the problem, as the others fell silent!

John Gill is considered as the father of Bouldering. He was probably the first person to boulder in the south, bouldering on Stone Moutain in Georgia in 1954, only a year after he had started climbing. In the 1960's, he went Bouldering at Shades Mountain in Alabama and Desoto State Park. He later tried Bouldering in other areas like southern Illinois, western Kentucky, and Missouri. While attending college at Georgia Tech., he tried gymnastics. He got the idea of the use of chalk in climbing from the rings he did as gymnastics.

Based on the accounts in the History of Bouldering, the sport has come a long way. Try Bouldering and experience what it has to offer.

It is common for those who are unfamiliar with Bouldering to wonder where the thrill is in scaling a twelve-foot wall. The characteristics below may help you change the way you look at it.

The dangers of Bouldering can always be lessened, if not prevented at all, by knowing how to do the sport correctly and safely. Here are some tips on how to ensure your safety whenever you go Bouldering:

While we took great pains to discuss Bouldering as exhaustively as we can, nothing beats actually doing it along with the advice from other climbers. Only by experience will you have the chance to improve and know how exciting this style is. So what are you waiting for? Go Bouldering now; the mountain walls are waiting for you.