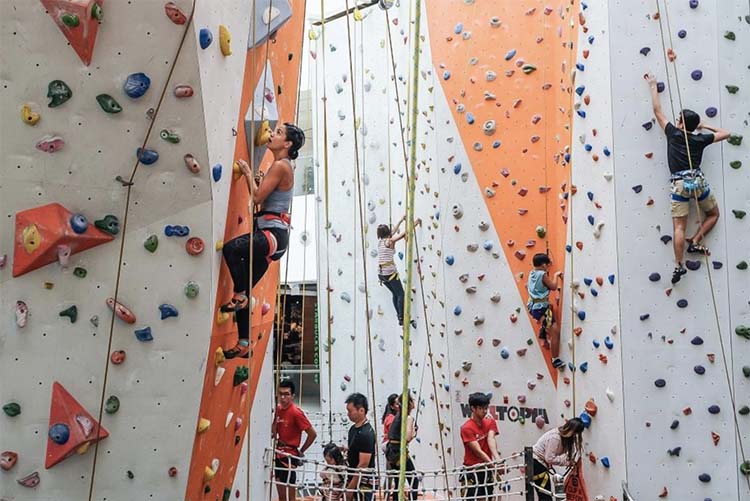 Indoor Climbing is basically an offshoot of Rock Climbing wherein people would scale man-made climbing walls. These are artificially-constructed walls attached with holds that mimic actual mountain walls. Ultimately, Indoor Climbing imitates the feel of real Rock Climbing, although in a controlled environment.

As far as Indoor Climbing goes, the techniques, pieces of equipment ( some most common for indoor climbing training include: grip strengthener, hangboards, climbing shoes, climbing harnesses...), and guidelines are similar to those of Rock Climbing. The sport's concept is simple: Climbing walls, which can range from 14 thousand square feet to the size of a basement, are bolted with holds (points where the hands or feet can settle their weight in while climbing) and are located under a roof may be considered as a venue for Indoor Climbing.

Indoor Climbing had started to become widely known during the 1980s when Indoor Rock Climbing gyms played a significant role in introducing a whole lot of people to Climbing. The gyms provided a safe, comfortable environment which catered to beginners and advanced climbers. Indoor Climbing's popularity increased even more when people started to offer lessons to those who are interested in it.

There are other reasons why some people resort to Indoor Climbing. Some areas either don't have a good natural wall to scale or it is just to dangerous to climb them because of bad weather or loose rocks and falling stones. Also, gyms are more accessible than normal climbing locations, which can be very favorable for people who have little time for leisure.

It is common for people who wish to take up climbing to wonder which of the two styles would better suit them. Here are a few of the differences between Indoor Climbing and Outdoor Rock Climbing:

Although Indoor Climbing comes close to Outdoor Climbing up to some point, there are of course some things that the former can never completely emulate. They include the breathtaking view of the landscape below, and that feeling of fulfillment as you reach the summit of a challenging mountain wall.

Here are some simple reasons why you should try Indoor Climbing:

Maybe after reading this article, you will now think twice if you see a climbing wall in your local gym. Go ahead, give it a try, and dive in to the world of Indoor Climbing. It might be the activity that you've always wanted to do; only you never knew what it was, until now.