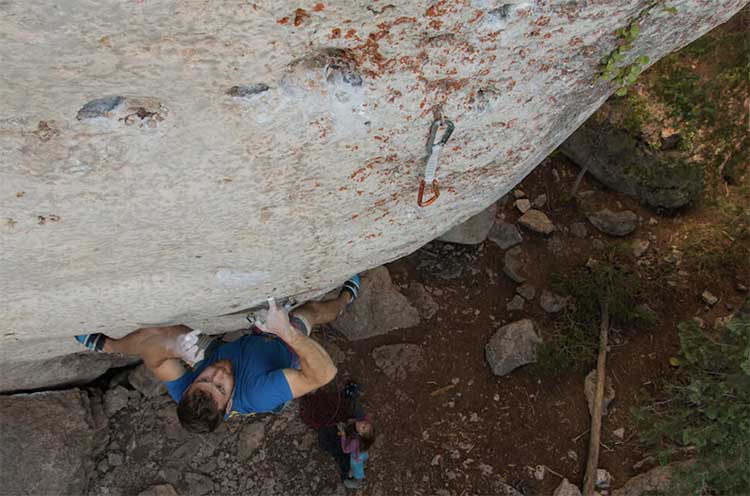 Sport Climbing is a type of Rock Climbing wherein a climber ascends a route that already has permanent bolts and anchors attached on the rock wall.

To sport climb, a rope is tied to a climber's climbing harness with the loose end handled by a belayer. As the climb progresses, the climber will eventually come across bolts where he or she could use a quickdraw to clip one side to the bolt and the rope to the hanging end of the quickdraw. This is basically how a climber is protected from falling. Normally, there is a distance of eight feet between each bolt in Sport Climbing route.

Located at the top of each sport route is usually an anchor that can accommodate a variety of equipment, but generally provides at least two points where the climber may place the last pieces of protection. Upon using the final anchor and clipping the rope to it, 'cleaning' commences, or the process of taking out the equipment used by the climber on the way down.

Since the element of danger is greatly reduced, Sport Climbing emphasizes on the gymnastic and athletic aspects of Climbing. Technique and certain moves are common place in Sport Climbing. Concordantly, this type focuses on the development of the climber's stamina, strength, and flexibility.

Sport Climbing was practiced even during the 1970s when climbers in France started to place bolts on mountain routes, particularly the difficult areas, to allow a climber to ascend easier by clipping lines to the bolts.

Since permanent bolts are already placed on a route, it is safe to say that the tools used in Sport Climbing are relatively minimal. However, it also means that every tool that a sport climber would use is important and necessary to successfully accomplish a sport route.

Here is a list of the tools needed in Sport Climbing:

Sport Climbing has recently become a trend in the Climbing business that has attracted a lot of enthusiasts worldwide, albeit the fact that Sport climbing is relatively new as compared to its older brothers such as Traditional Climbing, Bouldering, or Solo Climbing. Here are some reasons why more and more people are getting hooked up in Sport Climbing:

Sport Climbing is a great start in discovering the world of Rock Climbing. Since bolts are already placed in the rock walls, falling is one less thing to worry about. Try this style and have a safe climb!